Sekhukhune ready to step up for Momentum Proteas during Ireland tour  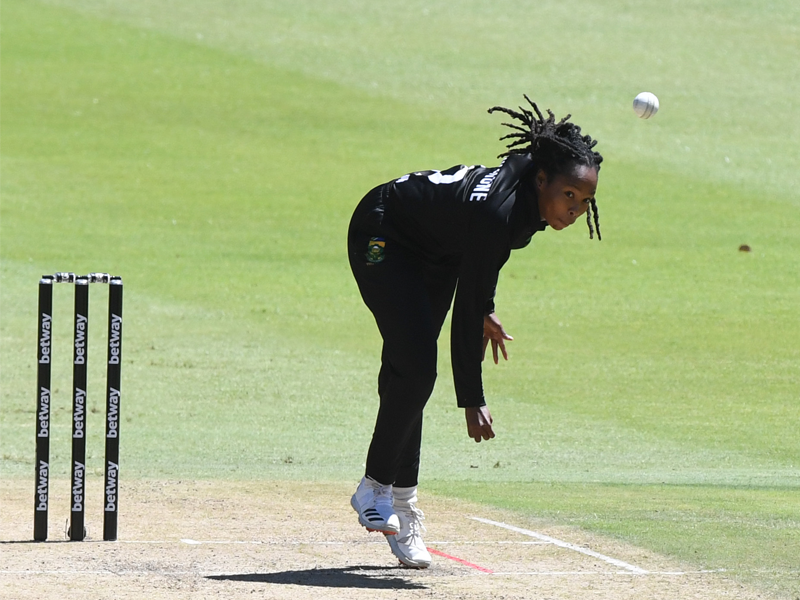 Seamer, Tumi Sekhukhune is excited to make the most of the opportunity to impress for the Momentum Proteas during the upcoming white ball tour to Ireland between 03 – 17 June following her experience at the 2022 ICC Women’s Cricket World Cup earlier this year.

Sekhukhune was named in the strong and relatively young 15-player squad that departed for the Irish capital, Dublin. There were five changes made from the World Cup squad, with key bowlers such as Marizanne Kapp and Masabata Klaas missing out due to illness and injury respectively.

This provides an ideal opportunity for Sekhukhune to stake a claim for a regular place in the team as part of the four-pronged fast bowling attack, with the 23-year old eager to grab the chance with both hands while also looking ahead to the unknown challenge of Ireland.

“Unfortunately, it is not nice to not see them in the team, but we have a young group of players coming in. Everyone is excited to just pick up their hands and show what they are capable of,” Sekhukhune stated.

“It’s also very exciting to just play against a bunch of new girls, upcoming players and a team that hasn’t been to the World Cup (since 2008),” she added.

Sekhukhune, who represents the Imperial Lions domestically, featured in two matches at the global showpiece in New Zealand, playing in the team’s only round-robin defeat to Australia, as well as the rained-out tie against the West Indies.

Despite having a challenging time with the ball against a Meg Lanning-inspired Aussie side, Sekhukhune looks back fondly at her maiden one-day World Cup experience that saw the team reach their second consecutive semi-final in the format.

“It was my first time playing in the 50-over World Cup,” the right-armer noted. “It was thrilling and nerve-wrecking but most of all, it was exciting, and it was just that adrenalin going through your body and knowing that you can also put your two cents into the team and help get that win.

“I am very fortunate I play with the likes of Wolfie (Laura Wolvaardt), (Marizanne) Kapp and Suné (Luus), and I don’t have to bowl to them because they really did well. Wolfie scoring back-to-back fifties, Marizanne taking a five-ers and Aya (Ayabonga Khaka) taking wickets, it was just really exciting to be with the team.

“Just being a part of this group of girls is one of the amazing things that have happened to me, and it is really nice to be a part of the Proteas,” she added.

Having made her international debut in both formats in September 2018 away to the West Indies, Sekhukhune has played a combined 44 matches in both T20 Internationals (21) and One-Day International (23) cricket for South Africa, taking a total of 36 wickets.

Ahead of an intriguing 2022 / 23 season that includes the historic 2022 Commonwealth Games in Birmingham and the 2023 ICC Women’s T20 Cricket World Cup on home soil, the Daveyton-born cricketer has a very simple ambition for the year.

“My goal is to get wickets,” Sekhukhune commented. “With the team, we’ve always had that momentum with our series wins, so we just want to take that momentum through to the World Cup next year.

“My goal is (always) to see myself getting wickets and also being consistent in my lines and lengths and getting those wins,” she concluded.

The first task for Sekhukhune this season could get underway when the Proteas Women take on Ireland in the first of three T20Is on Friday, 03 June at the Pembroke Cricket Club from 16h45. The action will be streamed live at www.livestream.com/CricketIrelandLive.