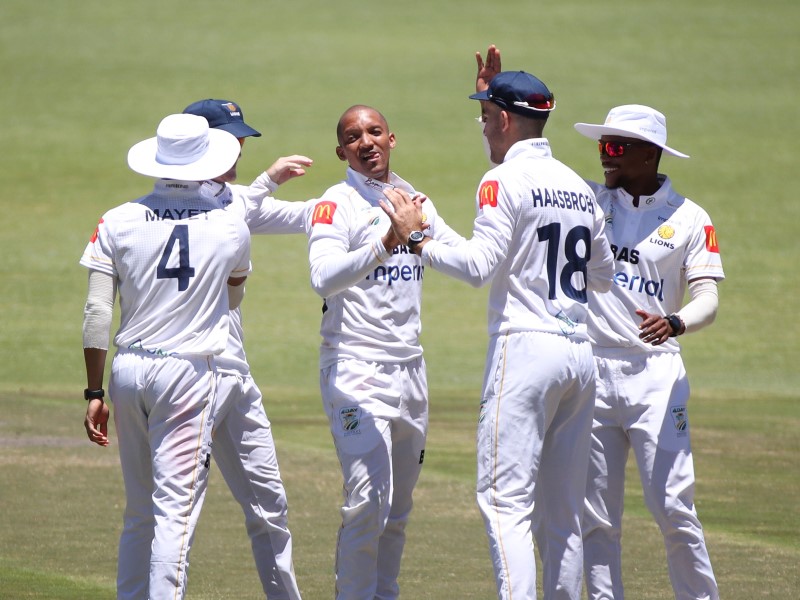 JOHANNESBURG: Following a captivating opening round of the red-ball season, the only two Division One teams to have tasted victory, the Imperial Lions and the Gbets Warriors, face-off in round two of the 2021/22 CSA Four-Day Domestic Series that gets underway on Friday.

The contest is one of seven exciting matches taking place from 05 – 08 November across Division One and Two of South Africa’s top-tier longer format competition, with all the games streamed live on SuperSport’s YouTube channel.

Along with the clash at St George’s Park, the GbetsRocks will be hosting their Western Cape neighbours, the Six Gun Grill Western Province at Eurolux Boland Park while the ITEC Knights make the short trip to take on the North West Dragons in Potchefstroom.

The other Division One game of the weekend involves the confident Hollywoodbets Dolphins, who will be looking to build on their impressive rain-interrupted draw in round one when they take on the Momentum Multiply Titans in Tshwane.

“We are very happy that we got the season off to a good start,” Lions coach, Wandile Gwavu commented ahead of Friday’s game.

“It’s always important for the morale and the confidence of the group that at the beginning of the season, you get off to a good start and we definitely did that. It was also special that it happened at home. We have played some really good cricket in the past here at the Wanderers and may it continue to be like that,” Gwavu added.

The Warriors had a thrilling finale to their season-opening game, clinching a one-wicket victory against the Titans on the morning of the final day’s play at SuperSport Park, Centurion, where it needed heroic low-order resilience to get the Gqeberha-based side the win.

“What I am pleased the most about that win was more the conversations around coming into the game and guys being challenged in terms of their skill set, which they have really taken on board,” the Warriors head coach, Robin Peterson said about their first game.

“It was great to see them go and execute, especially with ball in hand for periods of time, of course we can always have improvements but that’s what I was most pleased about. That and challenging our batters, in conditions where they haven’t grown up in, to go and play, make a plan, and dominate.

“It was a true team performance to get us over the line,” he added.

These two sides last met in a cross-pool game in last season’s franchise four-day competition, with the Lions coming out on top in a high-scoring affair that saw the Warriors fall short by an admirable 76 runs while in pursuit of a mammoth 513 for victory.

On facing the Lions, Coach Peterson pointed to the oppositions’ experienced coaching staff as a strength, stating: “The Lions are a good team, they have had a lot of additions to their management. I think JP Duminy is there, Prasanna Raman, the data analyst who was with the Proteas, Piet Botha as a bowling consultant, who was with SA A, so the management is beefed up and they’ve got a lot of experience in their corner so they will be a tough challenge,” he continued.

“Playing a team like the Lions, whether they won or lost, you know they going to have a good eleven to put on the park. We just hoping it’s a good game and we get some good weather this weekend where we can see the game last four days. They will be a good outfit, but we are also prepared and quietly confident going into this game,” Peterson said.

Gwavu is excited by the prospect of playing the Warriors at St George’s Park following their recent record against the Eastern Cape side, while also emphasizing the importance of looking inward and striving for improvement.

“It’s always been really good games (against the Warriors),” the Lions coach noted.

“I remember we went there in the past three years, playing at St George’s twice and we have managed to get a positive result on both occasions in 2018 and last season, so we are definitely going there with a bit of confidence behind our backs and looking forward to it.

“Our full focus is on improving our skills, we did play some good cricket (in the first game) but one of the things we pride ourselves in is always looking for improvement, both with the batting and bowling, as well as the fielding,” the coach concluded.

In Division Two, there will be three matches happening around the country, with the Six Gun Grill South Western Districts kicking off their season at home against the Mpumalanga Rhinos, while the Northern Cape Heat pits their wits against the Hollywoodbets Tuskers.

The Eastern Storm will be aiming for an immediate rebound after their opening game defeat to the Tuskers, when they take on the Limpopo Impalas in Benoni.

Following the opening round of action in the CSA 2021/22 Four-Day Domestic Series, here’s a few key statistics from Division One and Two:

All the games get underway from 10h00 daily, with the latest scores available here.