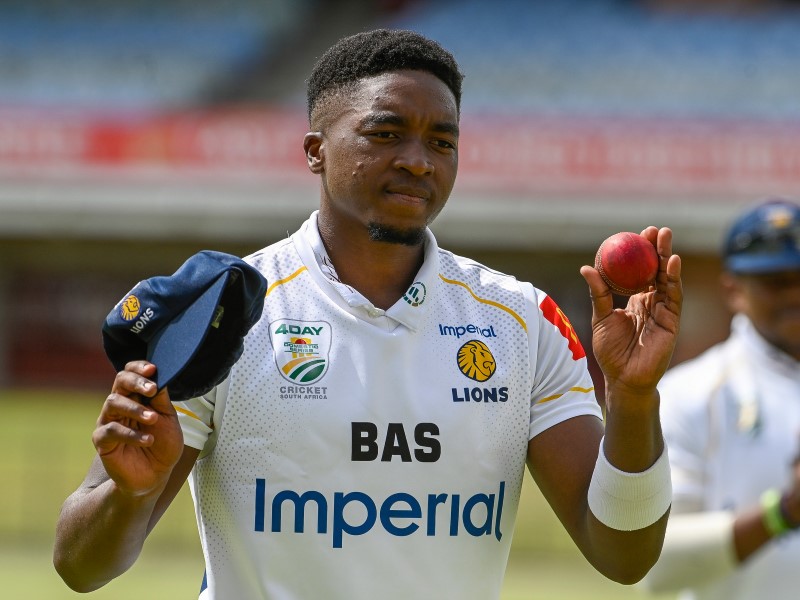 JOHANNESBURG: Proteas fast bowler, Lutho Sipamla recorded his best First-Class figures in an innings when he picked up six wickets to help the Imperial Lions bowl out the Gbets Warriors on day one of their CSA Four-Day Domestic Series encounter in Gqeberha on Friday.

The 23-year old seamer removed six of the Warriors batters at the expense of 34 runs as the visitors dismissed their opponents for just 96 runs within 49 overs. The Lions responded with 74/1 before bad light brought an end to the day’s play.

The titanic clash at St George’s Park is one of seven four-day encounters taking place over the weekend of 05-08 November, with matches streamed live via SuperSport’s YouTube channel.

Both the Lions and the Warriors entered the game with added confidence, having claimed one win apiece, as the home side won the toss and elected to bat first. The Lions bowlers began the game in fine form, with frontline bowlers Sipamla and Duanne Olivier (2-27) finding their line and lengths to make it difficult for the Warriors to find their rhythm at the crease.

Despite a 43-run, second-wicket stand between Matthew Breetzke (26) and Lesiba Ngoepe (39), the Lions pair ripped through the home side’s batting order, taking eight wickets between them as the Warriors went from 58 / 2 to 96 all out.

Joshua Richards (29*) and Dominic Hendricks (36) led the away side’s reply, with the Lions trailing by 22 runs with nine wickets in hand at stumps.

In a high-profile clash at SuperSport Park in Centurion, rising star Jordan Hermann stole the show for the Momentum Multiply Titans with a maiden First-Class hundred in only his second-ever game at this level as the Titans posted 371 / 6 on day one against the Hollywoodbets Dolphins, with opener Neil Brand also adding (56) a half-century.

In the Western Cape derby, the GbetsRocks – with captain Pieter Malan (96) leading from the front – put on a competitive first innings score of 267 all out against the Six Gun Grill Western Province, who had Mihlali Mpongwana taking impressive figures of five for 39 before Province called it a day on 5 / 0.

It was a batter’s day in Potchefstroom, with the ITEC Knights scoring two centuries in their high-scoring innings of 418 / 8.  Skipper Pite van Biljon brought up 127 off 194 balls at the top of the innings, while Patrick Kruger celebrated a career-best and undefeated score of 192* of just 210 balls, including 22 fours and four sixes.

The action continues tomorrow on Saturday, 06 November with the latest scores available here.

No play due to wet outfield