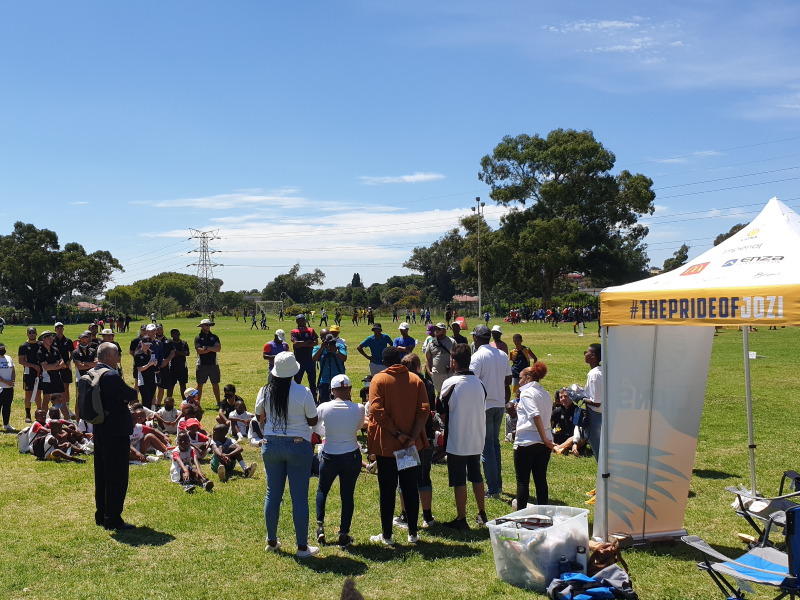 Johannesburg – Lions Cricket and Jeppe Cricket Club are proud to partner with the Corinthians Sports Club, a registered NPO, and the community of La Rochelle, south of Johannesburg to launch cricket at the Corinthians Multi Sports Club. This was part of an ongoing effort to promote diversity and inclusivity across all sporting codes.

The Corinthians Multi Sports Club was started by Jack Msibi. In 2012, Jack witnessed the undeniable soccer talent on the streets of South Hills. Talent that was overshadowed by illiteracy, high youth unemployment, gangsterism, drug distribution and burglaries by the same youth. The sight of gifted young people was the catalyst for social transformation. This changed his perspective and inspired him to use his sports experience and knowledge to establish an organization which would address personal and social challenges faced by young people through sport.

Community development is at the epicentre of the club’s ethos offering multiple programmes focused on education in the field of maths and innovation science.

“We are certainly grateful and humbled by the support we received from the council, SAPS, community and now Jeppe Cricket Club as well as Lions Cricket Union and we look forward to the start of a great relationship ahead. Our 5-year ambition is to expand our footprint beyond South Africa to Lilongwe, Malawi where there are over 250-beneficiaries and this includes a vision to expand more in the villages across the African continent with a special focus on enhancing the blind soccer competitiveness, revive interschools sports, compete in the Telkom netball league, the Motsepe League and various Lions Cricket club tournaments and leagues,” said Corinthians Multi Sport Club Founder Jack Msibi.

“Jack and I connected in Level 5 Lockdown. I could only dream about the success we have seen with the launch of cricket here at Corinthians. Jack would tell me about the youth who used to play street cricket in the area; it reminded us [Jeppe] about how cricket rose in popularity from boys playing street cricket in India, Pakistan, Sri Lanka and the West Indies. Hopefully, like with those countries, the passion for cricket can manifest in La Rochelle from the street to the field. Jeppe Cricket Club is honoured to be a part of this journey and to support Corinthians in their strive for social upliftment, we are here to provide a structure and backbone for cricket to grow. Sport has always had the power to unite, we have the chance to play a part in that and we are so excited to see it all unfold. To hear about where Corinthians started and to see where they are now will give anyone goosebumps at the beauty and passion of it. The Joes are proud to partner with an organisation whose vision and drive for sports and education are inspiring”.

Clr. Faeeza Chame of Ward 57, who was part pf the launch speaks about how she met Jack Msibi three years ago in the streets of South Hills;

“Jack stopped me and told me that he had a soccer club but they have no playgrounds – at that time there were no soccer grounds available. Then a couple months later the grounds in La Rochelle were abandoned and vandalised and I was then seeking a club or an organization that could look after this ground. Then Jack came to mind, and I just took a chance with him. I handed him the keys to the premises and gave him a temporary lease. Since he took over you could see the difference in the community amongst the youth. They started being more active on the sports fields. In addition, Jack and his partners maintained the venue well and I knew my decision had been the right one: I will support him on every way I can as I believe that our youth need stimulation and the area needs upliftment. Corinthians Soccer Club is expanding, and I was thrilled that cricket would be introduced. This is a first in our area and we can only go from strength to strength. Although there is still lots to be done and funding will play a major role in doing so.”

Lions Cricket CEO Jono Leaf-Wright who was also present at the handover says that it’s such initiatives that remind him of how much good there is in the world;

“I feel honoured to have witnessed the enthusiasm, warmth and professionalism of Mr Msibi, his club and members: What a powerful thing sport is! May your club continue to go from strength-to-strength Jack, with Lions Cricket and Jeppe Cricket Club behind you all the way!”