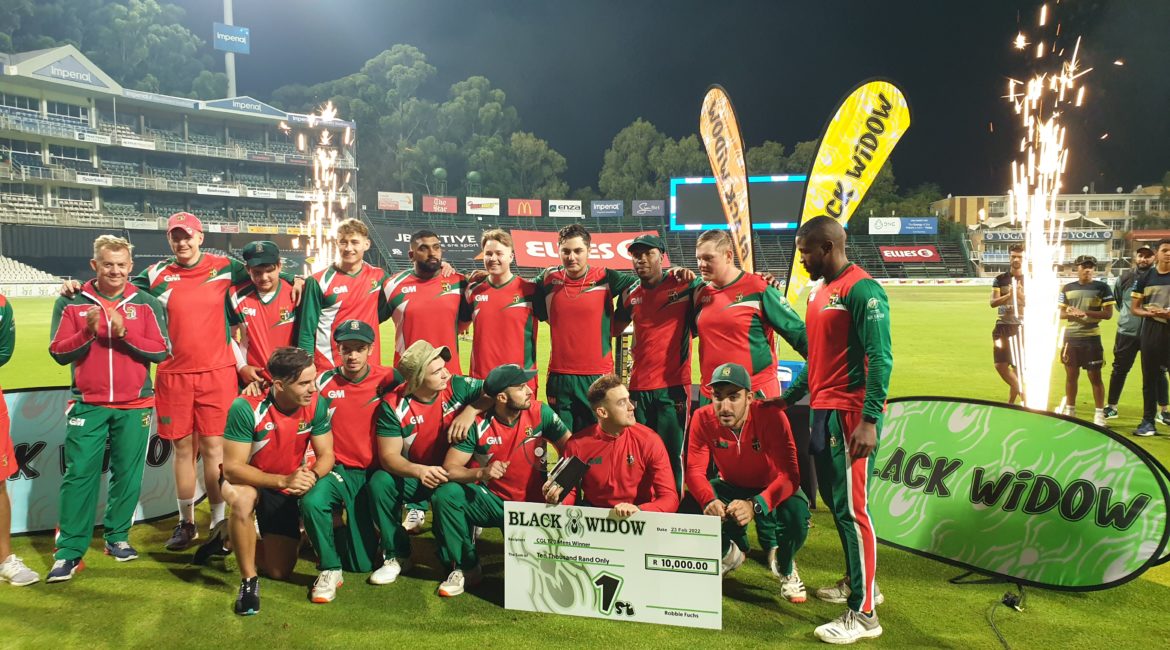 Johannesburg – On Wednesday 23 February, the iconic Imperial Wanderers Stadium hosted the much anticipated Black Widow T20 Club Finals and for the first time in two years, welcomed a select number of fans too.

The competition was a season opener for the Union’s affiliated Clubs’ with the premier teams competing for various individual and team prizes.

First up were the ladies: Soweto Pioneers CC taking on ENZA Delfos CC, with the latter winning the toss and electing to bat. ENZA Delfos CC scored 130/4 in their allotted 20 overs, thanks to top scorer and Player of the Match Modester Mupachikwa with 76 off 58 balls (10 fours and 1 six). In reply, the Soweto Pioneers C finished 62/4 in the rain affected match with the target revised to 81 off 11 overs, leaving ENZA Delfos CC ladies with the win by 19 runs.

“A huge thank you to Robbie Fuchs and his Black Widow team for the sponsorship of the tournament as well as everyone involved in making the competition an outstanding spectacle,” said Reuben Mandlazi, Cricket Services Manager: Lions Cricket. “The competition is growing in leaps and bounds with great talent arising year on year – and what a treat it was for such talent to be on display at the ever-impressive Imperial Wanderers Stadium. A big thank you to the Lions stadium team lead by Cyril Martin (Stadium management), Wanele Mngomezulu (Marketing and fan experience), Evan Flint (Head Curator) Sherina Desai (Lions Cricket Club Administrator) and so many others: You always produce top class wickets. In addition, big thank you to the CEO – Jono Leaf-Wright and the entire operations team for all the hard work in making sure that games are played once again. Lastly, thank you to all the supporters who came out to back their respective teams. Club cricket remains key to producing quality winning teams and ensuring the sustainability of our game. It is through such competitions as the Black Widow T20 that we will be able to field the best team possible come 1st class level.”

“The quality was evident in the way in which the match swayed in both directions throughout. This was our 4th final in as many years and the pressure was on as our team has changed significantly since 2021 and we find ourselves in a rebuilding phase. It was an honour to play at Imperial Wanderers Stadium and a big thank you to Lions Cricket for affording us the opportunity. I would also like to thank Black Widow for their support and sponsorship. We look forward to representing Lions Cricket in the play-off final against the winning North West based club and hopefully on to the National Community Cup from there.”