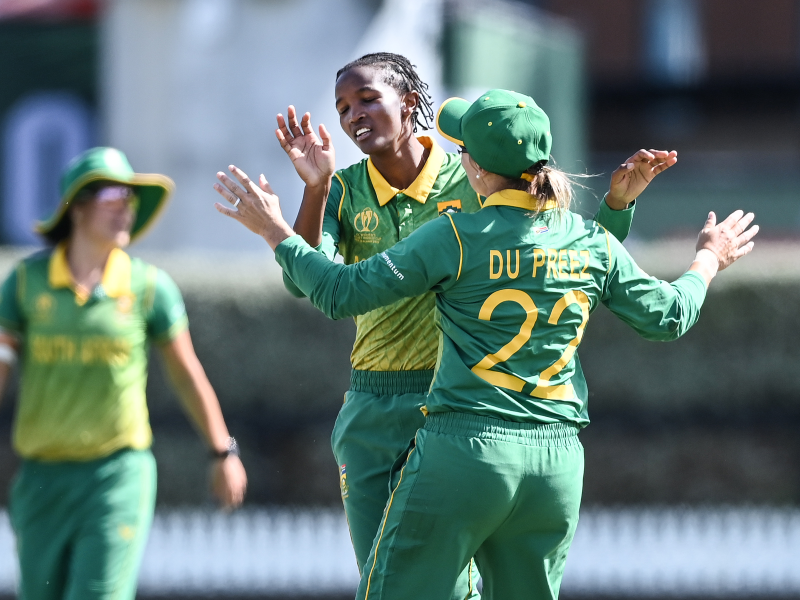 HAMILTON: The Momentum Proteas came out on top in another edge-of-the-seat finish as they defeated the host nation New Zealand by two wickets at Seddon Park in Hamilton on Thursday to claim their fourth straight victory of the 2022 ICC Women’s Cricket World Cup.

Key performances from Marizanne Kapp, Shabnim Ismail and Ayabonga Khaka helped restrict New Zealand to 228 all out before Laura Wolvaardt and captain Suné Luus top-scored, along with a critical contribution from Kapp with the bat, helped South Africa chase down the total in dramatic fashion.

The White Ferns won the toss and chose to set a score with Ismail making an early breakthrough, picking up the key wicket of Suzie Bates (4) before captain Sophie Devine and Amelia Kerr (42) partnered well for an 81-run, second wicket stand to set the platform for the home nation.

That stand was ended by Luus (1 / 48) as she trapped Kerr LBW before Khaka struck the very next over to remove new batter, Amy Satterthwaite (1) to leave New Zealand 88 / 3.

With Devine still going strong at the crease, the opener found an able partner in Maddy Green (30) as the pair put on a crucial 80-run partnership to help the hosts gain control in the middle as Devine reached her 14th half-century in One-Day International cricket.

South Africa eventually found a way through the key stand thanks to a brilliant piece of fielding from Wolvaardt and Trisha Chetty, with Green caught short of the crease after attempting a quick single.

Despite losing her partner, Devine upped the run rate alongside Brooke Halliday (24) before falling seven runs short of her century after being clean bowled by Khaka for a well-played 93 off 101 deliveries (12 fours, 1 six) with New Zealand on 198 / 5 with under 10 overs to go.

After losing their in-form batter, the New Zealand side failed to rediscover their rhythm at the crease. Marizanne Kapp (2 / 44), Ismail and Khaka wrapped up proceedings by taking the remaining five wickets, with the latter finishing with figures of three for 27 and three for 31 respectively as the White Ferns ended on 228 all out with 2.1 overs remaining.

In their chase, South Africa made a steady start at the crease before opener, Lizelle Lee (17) was run out after reacting late to a call for a third run before fellow opening partner, Wolvaardt teamed up with Tazmin Brits (18) for a 48-run stand to get the innings up and running.

Despite losing Brits, Wolvaardt and skipper Luus then combined for a match-changing 88-run partnership for the third wicket, with the former bringing up her third fifty in a row before she eventually fell for a magnificent 67 off 94 balls (6 fours).

That wicket sparked a mini collapse for South Africa, as Mignon du Preez (1) and Luus (51 off 73; 4 fours) – who celebrated her second half-ton of the tournament – departed in quick succession as New Zealand clawed back momentum, with A. Kerr (3 / 50) striking at crucial moments.

With the game in the balance, all-rounder Kapp (32*) was then joined by Chloe Tryon (14) in the middle as they added 28 runs together before more wickets fell to take the game into a frenzy finish as Kapp showed composure to score vital runs towards the end of the game before Khaka (2*) hit the winning runs with three balls to spare.

Kapp’s heroics earned her the Player of the Match award, her second in as many games, as the Proteas Women fortified their second spot on the table, tied with first place Australia with three games left to play against the aforementioned Australia, West Indies, and India.