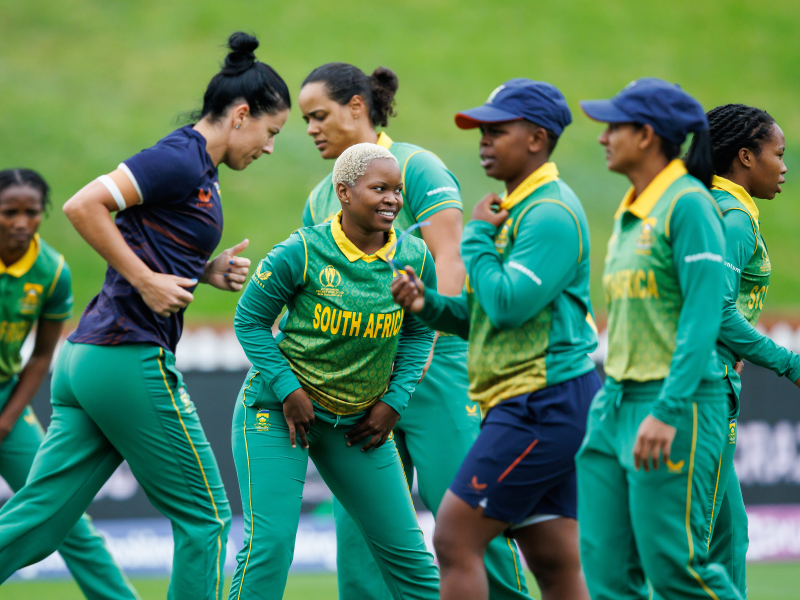 CHRISTCHURCH: Momentum Proteas vice-captain, Chloé Tryon states the team will be eager to still ‘put the foot on the accelerator’ when they take on India in their final league phase match of the 2022 ICC Women’s Cricket World Cup at the Hagley Oval in Christchurch on Sunday.

The crucial contest will be a day/night match and will get underway from 14h00 local time (03h00 CAT), broadcast live on SuperSport Grandstand in South Africa and the Sub-Saharan region.

Following a rain-abandoned clash against the West Indies in Wellington on Thursday which resulted in a point for both sides, the Proteas sealed second place and a semi-final spot behind the only team to beat them in Australia, having recorded wins against Bangladesh, Pakistan, England, and New Zealand to reach nine points out of 12.

Ahead of the match against India, in which their opponents will need a win to move into the top four, Tryon believes her team will not be taking their foot off the gas despite the comforts of securing qualification with a game to spare.

“It’s very vital (qualifying early),” the all-rounder began.  “You obviously don’t want to leave it up to the last group game, so I am thankful that despite the weather, we still got the point.

“It makes it a little bit easier going into the India game, so we can be a little bit focused on specific skills and making sure we are ticking off a couple of boxes that we haven’t tweaked together really well.

“It’s going to be really important that going into the India game, we still put the foot on the accelerator and make sure we get momentum going into the semi-final and I think we are on track to do that,” she added.

Before the World Cup, the Proteas enjoyed a stunning record of five consecutive One-Day International series wins to help them rise to second in the ICC rankings. That run included a historic 4-1 series success away to the subcontinent side, where Lizelle Lee and Shabnim Ismail shone with bat and ball, respectively.

Overall, between the two sides, India have won 15 of the 27 matches, with South Africa coming out on top in 11, while one match ended in a no result.

On the triumph in Lucknow in early 2021, Tryon commented: “Winning a series in India is not easy, it is really tough. The way the team approached it was really good.

“I was unfortunate not be there, but I watched the games and to see the grind and the graft the girls had, batting hard in tough conditions. It was always important to win a series like that and be able to face a world class team like India, so we were happy with that performance and there’s obviously stuff we want to work on as a team but to win like that, in a place like India, it is always good.

“We know they are a competitive team, so we have to be on top of our game to win this game and take momentum into the semi-finals,” she continued.

If South Africa defeat India, they will most likely set up a semi-final bout with defending champions, England, who will also be wrapping up their round-robin phase against debutants Bangladesh on Sunday, while also confirming the West Indies’ involvement in the last four.

If India overcome the Proteas, it will be dependent on the net run rate to see who South Africa will face between India and England (if they beat Bangladesh) in the semi-final, with first place on the log facing fourth while second and third go head-to-head in next week’s knockout round.